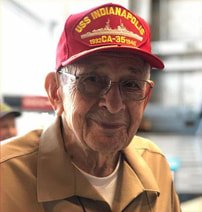 Funeral services were conducted at Calvary Bible Church in Joelton at 10:30AM on Saturday, May 15th, with his son, Dr. David Harrell, and Chaplain Kenneth Kerr (retired Colonel United States Army) officiating.  He was buried in Murray Memorial Gardens, Murray, Kentucky with his grandsons serving as pallbearers.

Mr. Harrell was born on October 10th, 1924 in Trigg County, Kentucky to the late Alvin H. and Myra Belle Atwood Harrell. He was a retired Distributer with Pella Window Company and was a member of Calvary Bible Church.

He was a decorated World War II Marine who fought in the Pacific theater aboard the USS INDIANAPOLIS and was the last surviving Marine of her sinking (the greatest naval catastrophe at sea in the history of the Navy), a recipient of the Congressional Gold Medal, and received an honorary promotion to the rank of Sergeant in 2018. More importantly, he was a godly man with a deep love for Christ and a longing for His return.

Harrell was stationed aboard the USS Indianapolis in 1945, guarding components of the atomic bomb it was carrying. In one of the most notorious stories of the war, the ship was torpedoed by a Japanese submarine and sank, leaving its crew fighting for their lives in shark-infested waters. Of the crew of 1195 men, Harrell was one of only 316 to survive. He later returned to the U.S. and owned and operated the Pella Window Company in Rock Island, Illinois, for 35 years until his retirement in 1985. Along with his son, David Harrell, he wrote the book “Out of the Depths,” relating his experience in the USS Indianapolis disaster. In 2018, Harrell and the other remaining survivors of the USS Indianapolis were honored with the Congressional Gold Medal. His death leaves only five survivors of the disaster still living.

“I still remember my first impression when I boarded the Indy, as she was affectionately called: This thing is big—really big! It was like a floating city. For a country boy from Kentucky, it was overwhelming. The sight of the massive guns gave me goose bumps. Never having seen guns larger than a double-barreled shotgun, I remember laughing to myself, thinking, My, my, my. We can win the war just by ourselves with these monsters!” —from “Out of the Depths”.