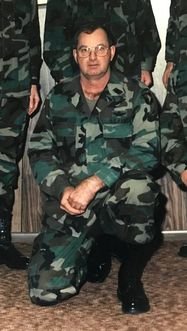 Gary W. Crisp, was born on June 18, 1948, in Clay Lick, Kentucky to Arnold Lee Crisp and Bessie Ellen Isom-Crisp. He graduated from Rowan County Senior High School in 1966. Afterwards, he enrolled and took college classes at Morehead State University. He enlisted in the U.S. Army in Ashland, Kentucky on April 4, 1968 and attended Basic Training at Fort Knox, Kentucky; and Advanced Individual Training at Fort Eustis, Virginia.

In July of 1980, then SFC Crisp was assigned to 227th Aviation Battalion, 1st Cavalry Division, and participated in number of deployments to Honduras and South America. He led his Soldiers as a Platoon Sergeant, then as First Sergeant during his five-year tour with the 1st Calvary Division.

The next assignment, for then First Sergeant Crisp was with the 11th Armored Cavalry Regiment, in Fulda, Germany. There he would serve as the First Sergeant for S-Troop in the Blackhorse Regiment. In 1987, SFC Crisp was promoted to the rank of Sergeant Major. He did a PCS (Permanent Change of Station) to Fort Bliss, Texas to attend the Sergeants Major Academy in January of 1988. After he completed the Sergeants Major Course, Sergeants Major Crisp’s orders were received for an assignment, as a Staff Sergeant Major to 3rd Battalion, 101st Aviation Regiment, 101st Airborne Division (Air Assault), where he served the next two years.

He was moved from 4th Battalion to the Aviation Brigade on 26 May 1992, to work as a Brigade level Staff Sergeant Major until 1994.
He was reassigned as the Command Sergeant Major, of the 101ST Aviation Brigade, 1994 -1995.
CSM Crisp was married to Sharon Johnson. He was the father of two daughters: Sharon Kay and Carol.