About Our Honor Guard 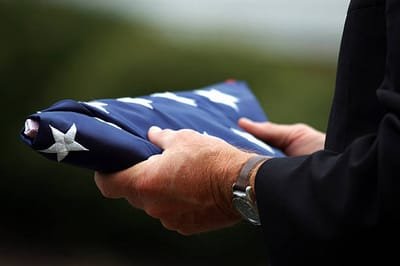 Post Honor Guard
Our Honor Guard is new. We have started by getting everyone folding the flag properly at the grave site. Syke's Funeral Home has stepped up here in Clarksville, Tennessee allowing us to use their facilities to practice. Sykes has offered to purchase our uniforms and has set aside space at the funeral home for storing all of out equipment in a safe and secure place. Our Honor Guard currently practices every Friday evening at Syke's Funeral Home.

An honor guard detail for the burial of an eligible veteran consists of not less than two members of the Armed Forces. One member of the detail represents the parent service of the deceased veteran.

The honor detail will, at a minimum, perform a ceremony that includes the folding and presenting of the American flag to the next of kin and the playing of taps. When available taps will be played by a bugler, however there are so few buglers available that the military services may choose to provide an electronic recording of taps. The veteran's parent service representative will present the flag.

Funeral Honors EligibilityThe preferred method for verifying eligibility is the DD 214. If the DD Form 214 isn't available, any discharge document showing other than dishonorable service can be used. The DD 214 can be obtained by requesting it online from the National Archives.

All members should attend this training. 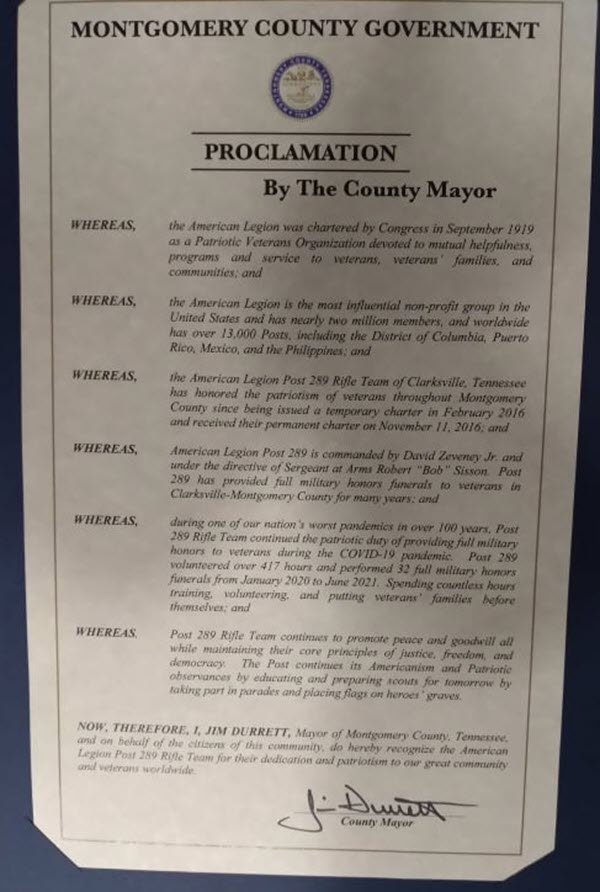 WHEREAS, the American Legion was chartered by Congress in September 1919 as a Patriotic Veterans Organizations devoted to mutual helpfulness, programs and service to veterans, veterans' families, communities; and

WHEREAS, the American Legion is the most influential non-profit group in the United States and has nearly two million members, and worldwide has over 13,000 Posts.  including the District of Columbia Puerto Rico, Mexico, and the Philippines; and

WHEREAS, the American Legion Post 289 Rifle Team of Clarksville, Tennessee has honored the patriotism of veterans throughout Montgomery County since being issued a temporary charter in February 2016 and received their permanent charter on November 11, 2016; and

WHEREAS, the American Legion Post 289 is commanded by David Zeveney Jr. and under the directive of Sergeant at Arms Robert “Bob" Sisson.  Post 289 has performed full military honors funerals to veterans in Clarksville-Montgomery County for many years; and

WHEREAS, during one of our nation’s worst pandemics in over 100 years, Post 289 Rifle Team continued the patriotic duty of providing full military Honors to veterans during the COVID-19 pandemic.  Post 289 volunteered over 417 Hours and performed 32 full military honors funerals from January 2020 to June 2021. Spending countless hours training, volunteering, and putting veteran families before themselves; and

WHEREAS Post 289 Rifle Team continues to promote peace and goodwill all while maintaining their core principles of justice, freedom, and democracy.  The Post continues its Americanism and Patriotic observances by educating and preparing scouts for tomorrow by taking part in parades and placing flags on heroes' graves.

NOW, THEREFORE I, JIM DURRETT, Mayor of Montgomery County Tennessee, and on the behalf of the citizens of this community, do hereby recognize the American Legion Post 289 Rifle Team for their dedication and patriotism to our great community and veterans worldwide.